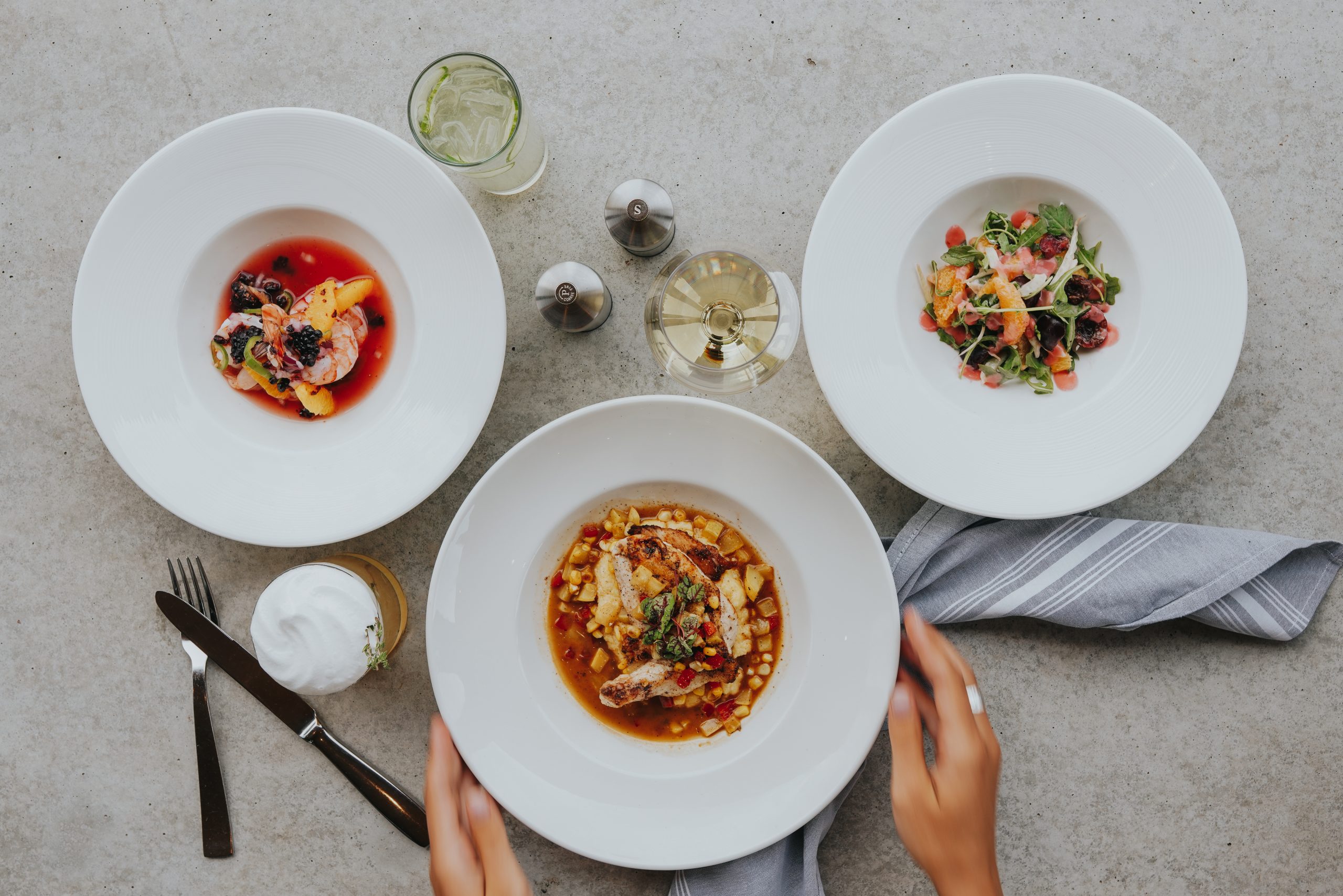 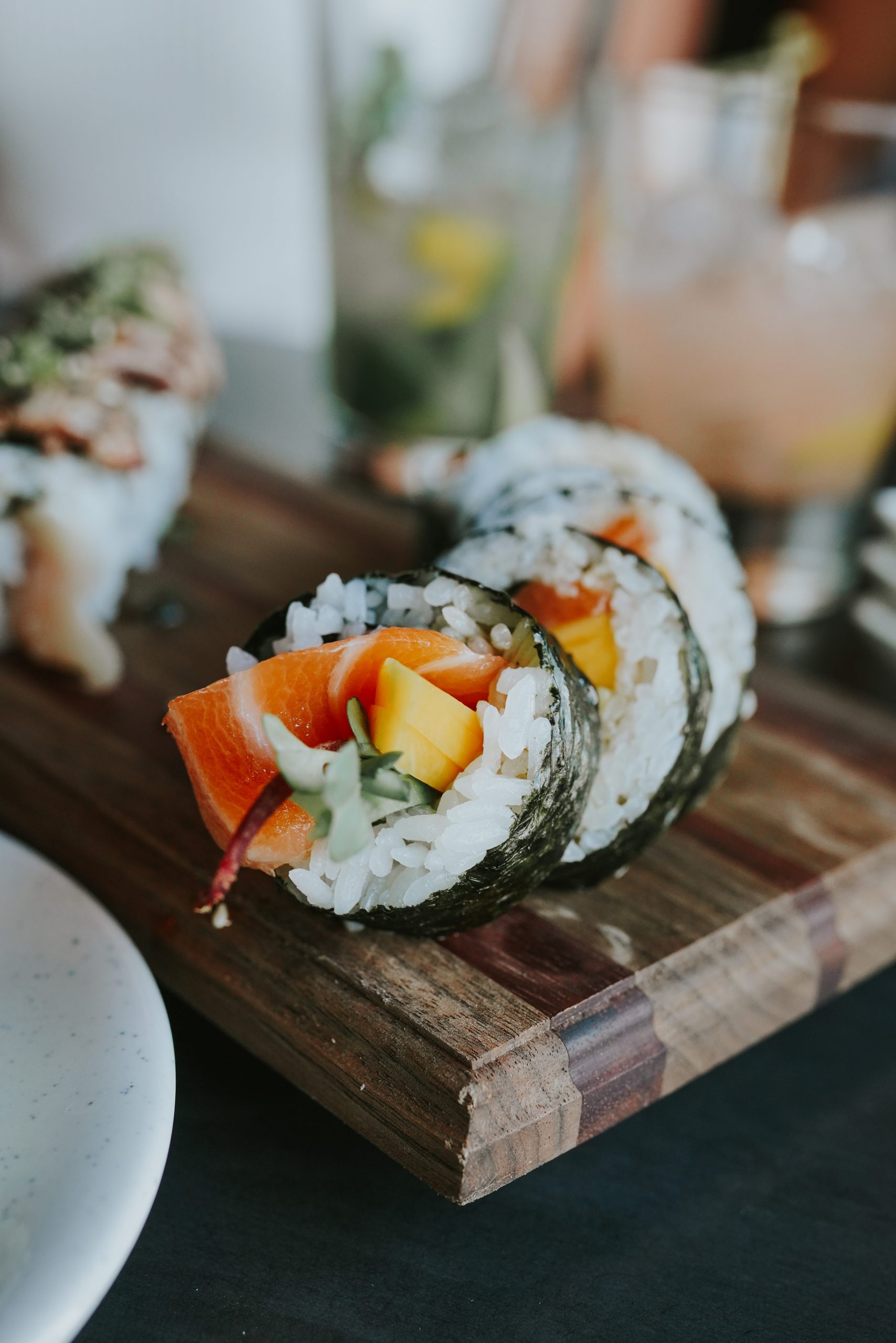 From a simple Mexican street taco and cold cerveza, to a hearty bison steak,

is blossoming this winter. Here are five can’t fail dishes, plus drinks! 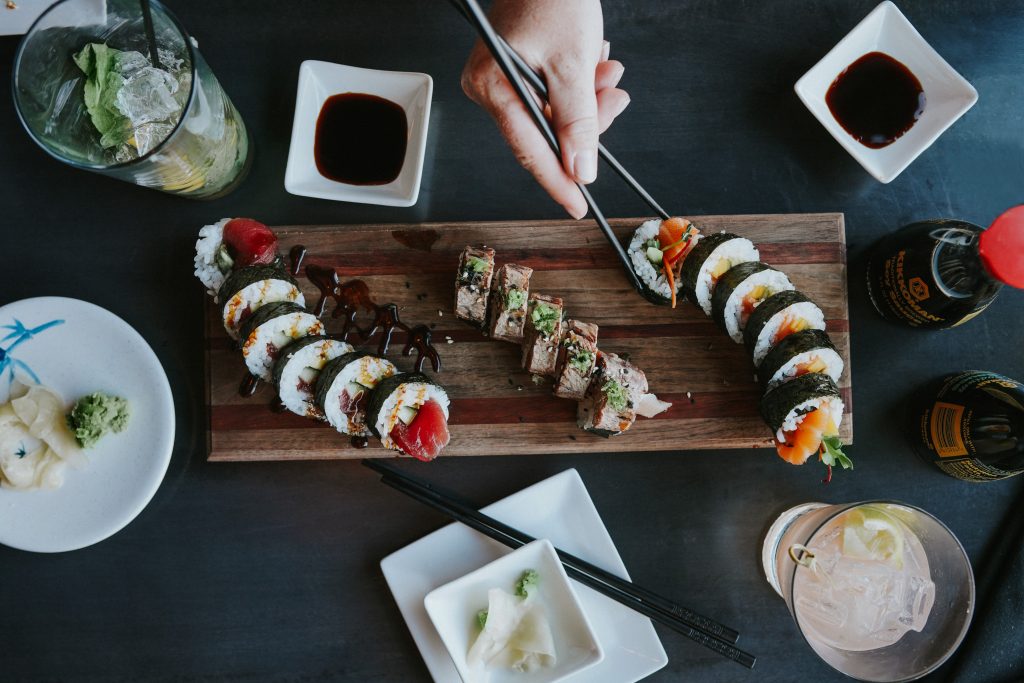 Since 2019, Troy, “Twist” Thompson and Blue Buddha, Big Sky have been serving up not just the freshest sushi in Montana, but the freshest sushi in the Mountain West. An hour and a half after the sashimi planes touch down in Denver from Japan, the Blue Buddha order is on its way to Big Sky. Because they’re able to source delicacies directly from Japan, Blue Buddha now offers an immersive Omakase experience in which Omakase Chef Jaison LeRoy decides what you eat.

Signature Experience: Because no two Omakases are identical, we can’t list a single dish here. But know this: In the two weeks (ideally) between your reservation and your arrival in the driftwood and cherry-blossomed “Electric Tokyo themed” Omakase room, chef Jaison is sourcing rare ingredients from Japan for your unique 10- to-17 course meal that goes down small bite by small bite over two to three hours. The selection starts off light (low fat content fish) and progresses to Blue Buddha’s legendary bluefin tuna selections. Here’s just part of the menu from a recent threehour affair; with our translations where necessary.

O-Toshi Japanese cucumber itogaki. | Translation: the Japanese equivalent of an amuse-bouche (fun bite) this O-Toshi is a dehydrated flaked fish with cucumber.

Madai and Kanpachi Sashimi with lemon juice and lime zest. | Translation: Madai is a bright and delicate plum-fed sea bream. Kanpachi is a lower fat amberjack—a cousin of hamachi.

Hamachi Sashimi served with serrano and duck bacon. | Translation: Hamachi is yellowtail (fatter from colder water). The duck bacon is from Montana.

Akami and Ikejime Hirame Nigiri | Translation: Akami is a leaner cut of bluefin. Hirame is a nearly translucent cut from young flounder. Ikejime is a humane technique used to reduce a fish’s stress levels before it’s eventually filleted.

Shima Aji and Hotate Sashimi with Truffle Ponzu | Translation: Shima Aji is a light and nearly clear mackerel. Hotate is a prized scallop from Japan’s north island of Hokkaido. Ponzu is a citrus based sauce.

Aperitif or Night Cap: In August, Twist opened the Drunken Monk adjacent to the Blue Buddha dining room. The offerings? “High-end cocktails and low-end ramen,” says Twist. The atmosphere? “It’s based on a small restaurant culinary scene in the heart of Tokyo where eateries that seat maybe 10 to 15 people line an alley,” says Twist. It’s here that mixologist Joe Messreni will make you an Iron Toad: Japanese whisky, lemon, honey, green matcha, a hint of chocolate bitters, and frothed egg whites finished with a sprinkle of nutmeg. 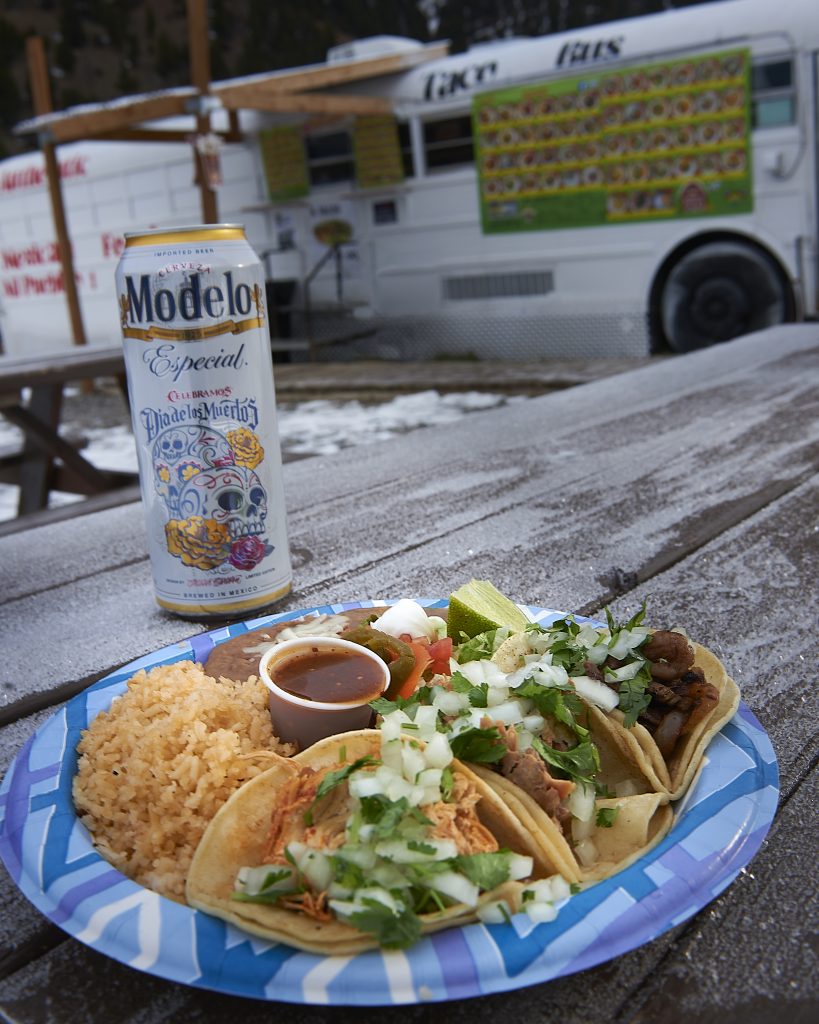 For the past three years, owner Victor Montaño and his family have been serving up Jalisco, Mexico, style street tacos and entrees from the Taco Bus on Lone Mountain Trail. This is skier food, but in summer, workers flock here too.

Signature Dish: A torta is a Mexican sandwich that traces its roots to Jalisco, where Montaño’s family has been making them forever. The original version featured so much salsa inside of a round bun that it resembled a sloppy joe. Montaño’s take features grilled ham and pepperjack cheese, topped with shredded lettuce, sliced avocado, tomato, and onion on a telera roll.

Chase it With: You can eat inside (or outside in summer), but most folks get their food to go and pair their tortas, tacos, and tamales with a Modelo and a lime.

It’s reserved for members—if you know one try to get an invite—but the dining and atmosphere at the Spanish Peaks Mountain Club is like nowhere else in North America. Bode Miller calls it a “European experience without any European pretense.” It’s here that, after a long day in the alpine, you can kick back in a warm lodge and enjoy food prepared by chef Jan Pfeiffer, from the best local ingredients—including standout hydroponic produce from nearby Bozeman and Jackson Hole.

Signature Dish: Trust us, a cozy mountain lodge on a cold night makes food taste better. Not that Chef Pfeiffer’s 16 Ounce, Dry Aged Bone-In Bison New York Steak needs any help. It’s common to get properly dry aged beef in New York and Chicago. But believe it or not, it’s tough in the Mountain West. As for hitting that mark with bison—good luck. Not so at the Club, where Pfeiffer’s bone-in Bison steaks are dry aged as a whole primal cut for 42 days at 36 degrees temperature and a relative humidity of 70 percent, before they get butchered. Says Pfeiffer: “We cook our steaks inside a CVap oven (a specialty oven we have) under sous vide conditions to 115 degrees for one hour for additional melt in your mouth tenderization and then finish them off with fresh ground Tellicherry black pepper and Maldon sea salt in a hot cast iron pan with some grapeseed oil to get a beautiful caramelization going. The steak gets its final touch through European Butter basting with a sprig of fresh thyme, rosemary, oregano and a smashed garlic clove. Voila!” That star item is accompanied by crispy garlic-parmesan frites seasoned with sea salt, fresh finely minced garlic, chopped Italian flat leaf parsley, and parmesan oil made from the Club’s leftover Parmigiano Reggiano cheese rinds. You can choose between classic sauce béarnaise, sauce bordelaise, or chimichurri.

Around the Fire: A Spanish Peaks Mountain Club staffer concocted this refreshing drink for après. Fittingly, it’s called the Alpenglow. Envision a layered drink with dry gin, elderflower liqueur, grapefruit juice, and finished with a pomegranate juice float. “The Alpenglow is simple to make, but complex in taste,” says Assistant Food and Beverage Manager Alejandro Mendoza. “The gin brings nice botanical flavors that complement the elderflower. It all gets balanced out by the bright acidity from the grapefruit juice. The pomegranate juice adds a nice splash of color and subtle flavor. It’s a great cocktail to have after a long day on the mountain.” 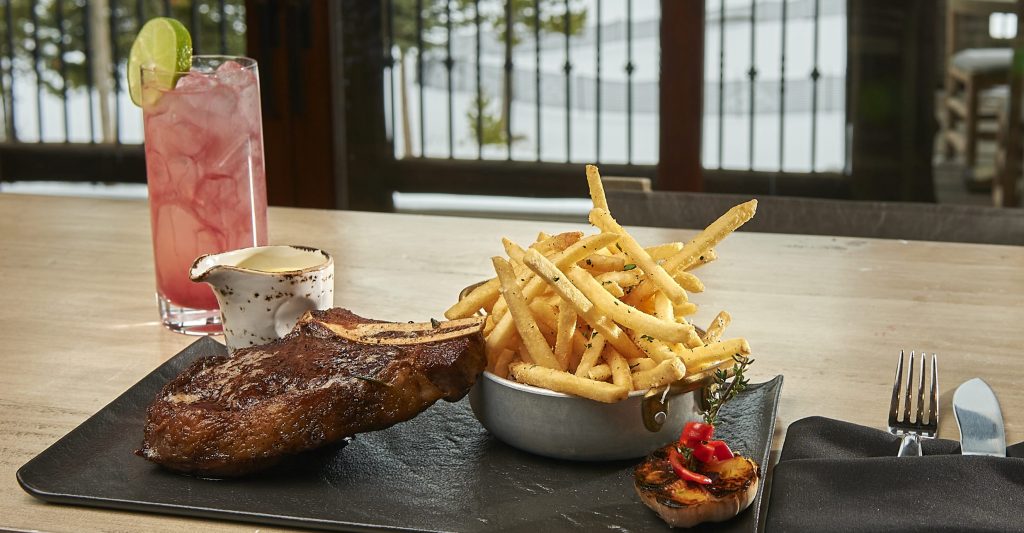 A child of the American melting pot, Lotus Pad chef and owner Alex Omania grew up with a Russian mom and a Filipino dad. She developed a taste for Asian food at a young age and pursued her passion in culinary school, and later, during a year abroad in Thailand, she studied local cuisine. Early on in her Big Sky days, Omania hosted Thai themed dinner parties that were such a smash the Lotus Pad—six tables—was born in 2007. They moved into their clean, bright, and larger location in Big Sky Town Center in 2017.

Signature Dish: Pad Kee Mao is loosely translated to “Drunken Noodles” in English. Except there’s no alcohol here. The dish gets its name from the spice—double black diamond on Lotus Pad’s scale. “It’s so spicy that you have to drink with it to tamp down the heat,”says Lotus Pad General Manager Marsha Barker. (Don’t worry, you can tone it down.) Think wide rice noodles in a sweet, dark, infused soy sauce, accompanied by red bell peppers, broccoli, green onions, basil, and topped with lime, cilantro, and peanuts. And oh yeah, Thai chilis. The pro move is the fried egg on top, the yoke of which blends with the soy enriching the housemade sauce.

Extinguish the Fire With: An ice cold Sapporo (the Japanese company dates to 1876) is the easy choice here. But a pinot gris takes this classic Thai street fare a bit more upscale. 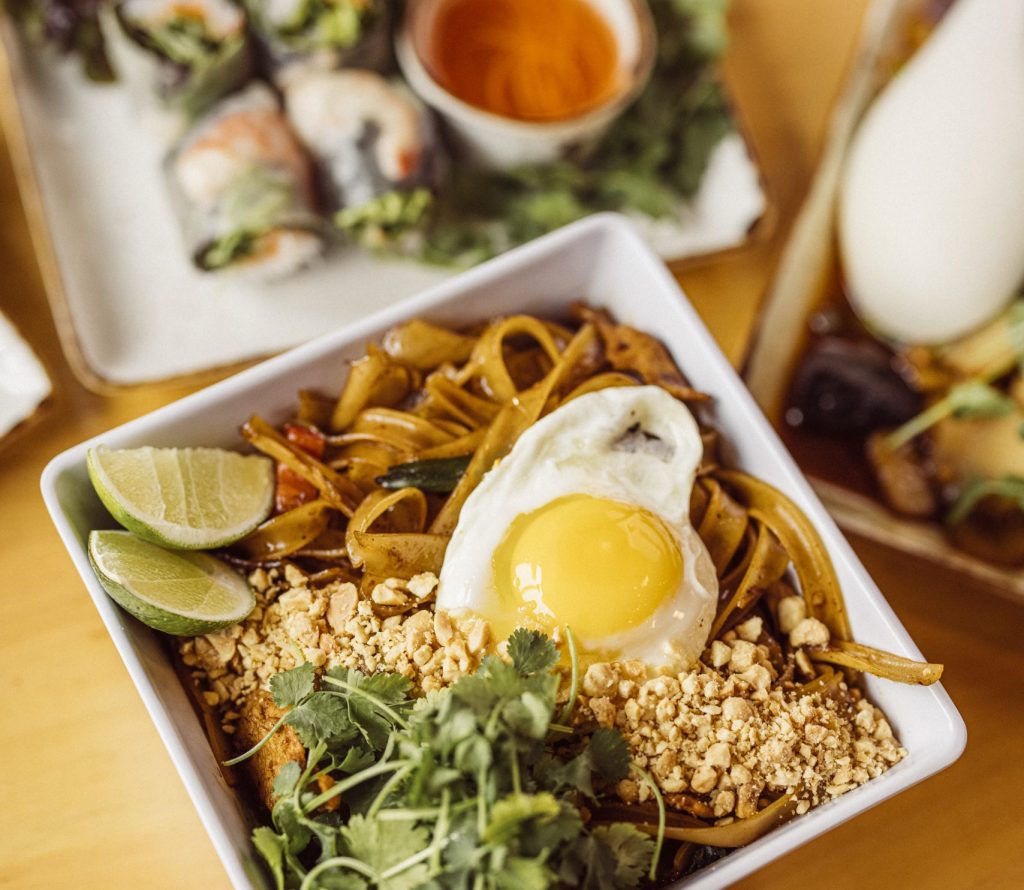 It started as a deli in the ’90s, but BYWOM (By Word of Mouth) has been serving up the area’s best burgers ever since. The classic BYWOM Burger—an upscale Big Mac complete with two patties and special sauce—is a must.

Signature Dish: Inspired by the art of burger cooking, BYWOM’s new Chopped Lamb Steak is the restaurant’s latest standout. Here, an eight-ounce ground lamb steak is topped with goat cheese and a house-made tomato jam that carries a bit of sweetness and spice thanks to ginger. Then it goes under the broiler for that melt before being served with a mint chimichurri sauce and potatoes.

Before Dinner: The Dirtbag Daze martini—Bulleit Bourbon, Amaretto, Cointreau, lemon juice, and orange bitters, is a tribute to how most Big Sky locals (70 percent of BYWOM’s clientele) set their roots down. “We were all dirtbags once,” says co-owner John Flach. 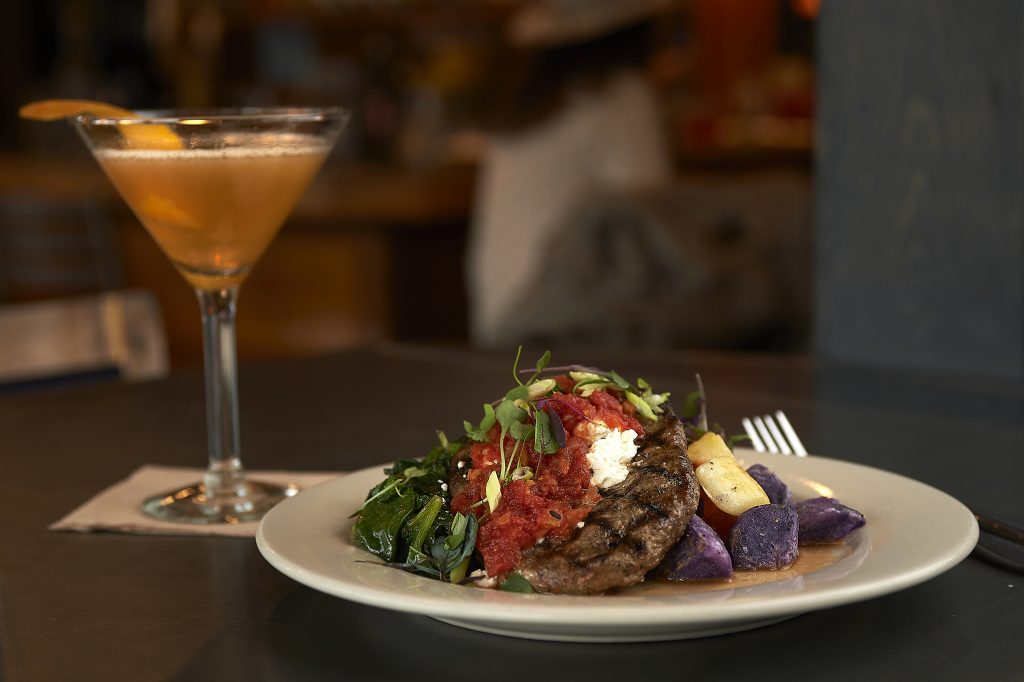 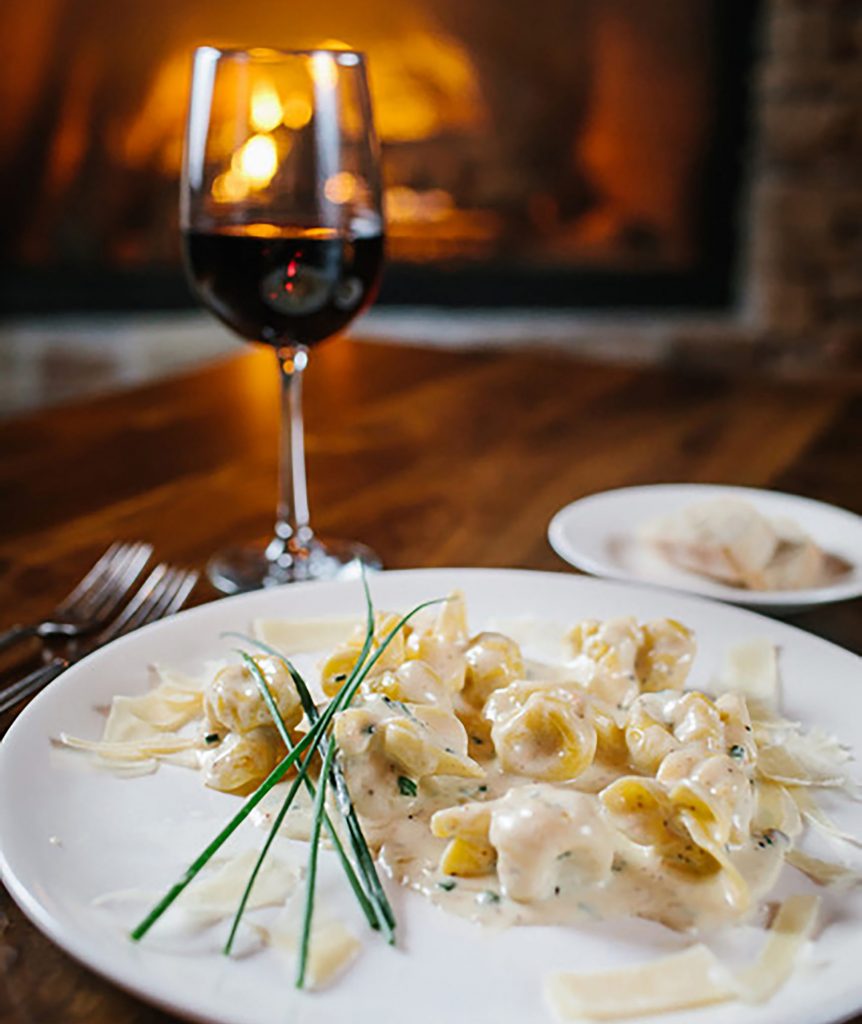 Michaelangelo’s chef and co-owner Michael Annondono spent his formative years cooking under a master chef in Italy’s Piedmont (the town of Acqui Terme to be precise.) Later, he and his business partner opened a restaurant in Cleveland celebrating northern Italian cuisine. In 2016, they opened Michaelangelo’s in Big Sky. The menu is extensive. The atmosphere is fine dining with a warm casualness—wood floors, ceilings, tables, posts and beams, and a hearthstone fireplace. “It’s a bit more elegant than the rustic Italian style,” says restaurant manager Emily Annondono, Michael’s sister and the sommelier. “But it’s just as relaxing.”

Signature Dish: Sacchetti Al Tartufo is without question Michaelangelo’s most popular dish. “We try to never run out of the ingredients, but when we do people are crestfallen,” says Emily. Sacchettti, literally “little purses,” are delicate handmade pastas shaped as drawstring pouches. Here they’re stuffed with ricotta and truffle and served with a black Tartufata cream sauce. Breaking from the northern theme, Tartufata originates from the southern island of Sardinia—it’s a mix of still more truffles and olive oil that the Italians use to spoon into sauces. “It’s a unique flavor, especially here in southwestern Montana,” says Emily. “That’s why it’s so loved.”

Pair it With: You can go two ways with this one. A light bodied red from the Piedmont like a Nebbolio complements the truffle. Or an acidic white from the same region—Soave is the standard—will help cut the heavy cream. But don’t be afraid to expand your palate. The wine case behind the bar is impressive.

‹ Previous Post: The Neighbors are Animals: Meet the Grizzly Bear
Next Post: At Montana’s Big Sky Resort, a new perspective on skiing ›