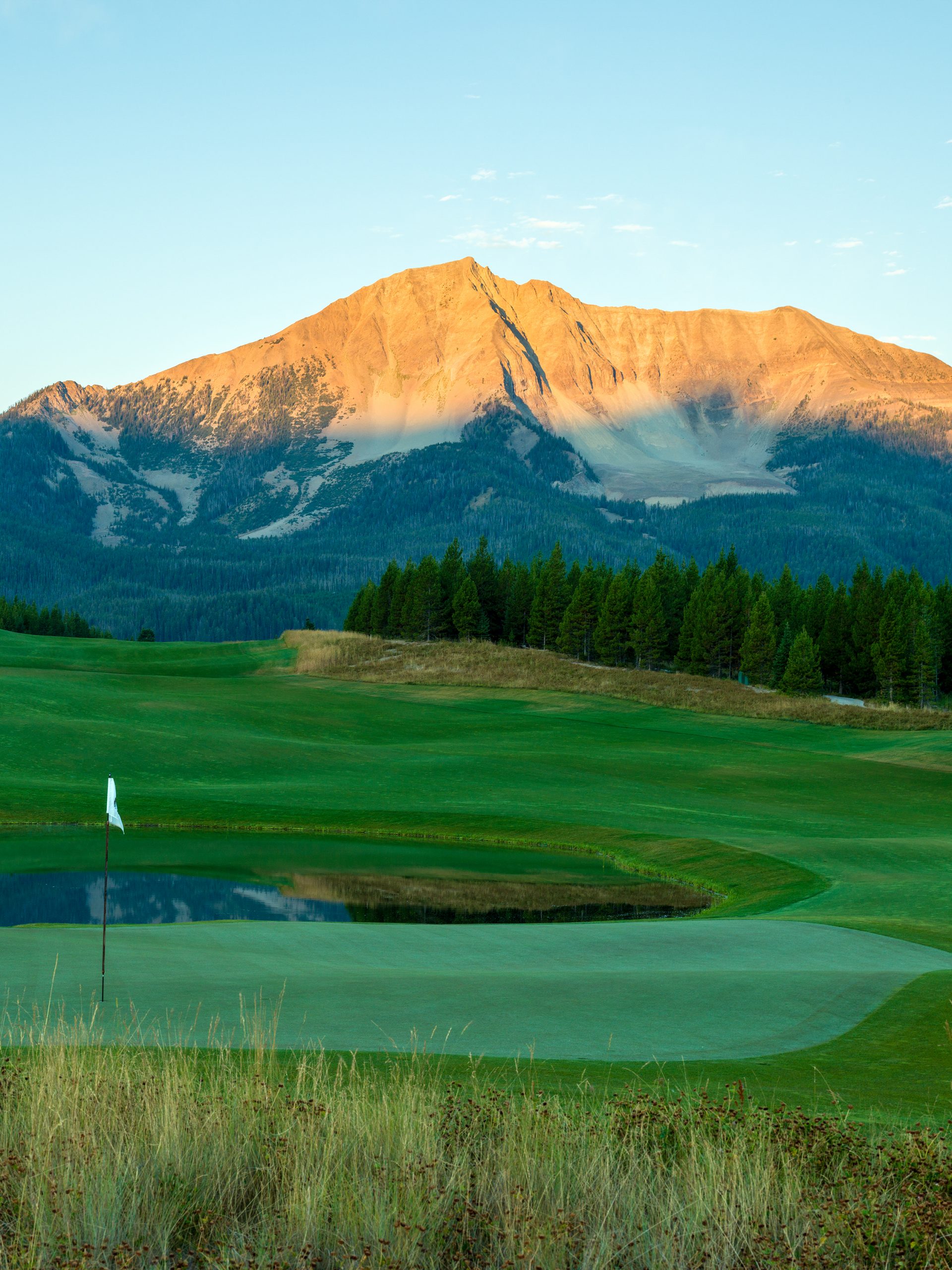 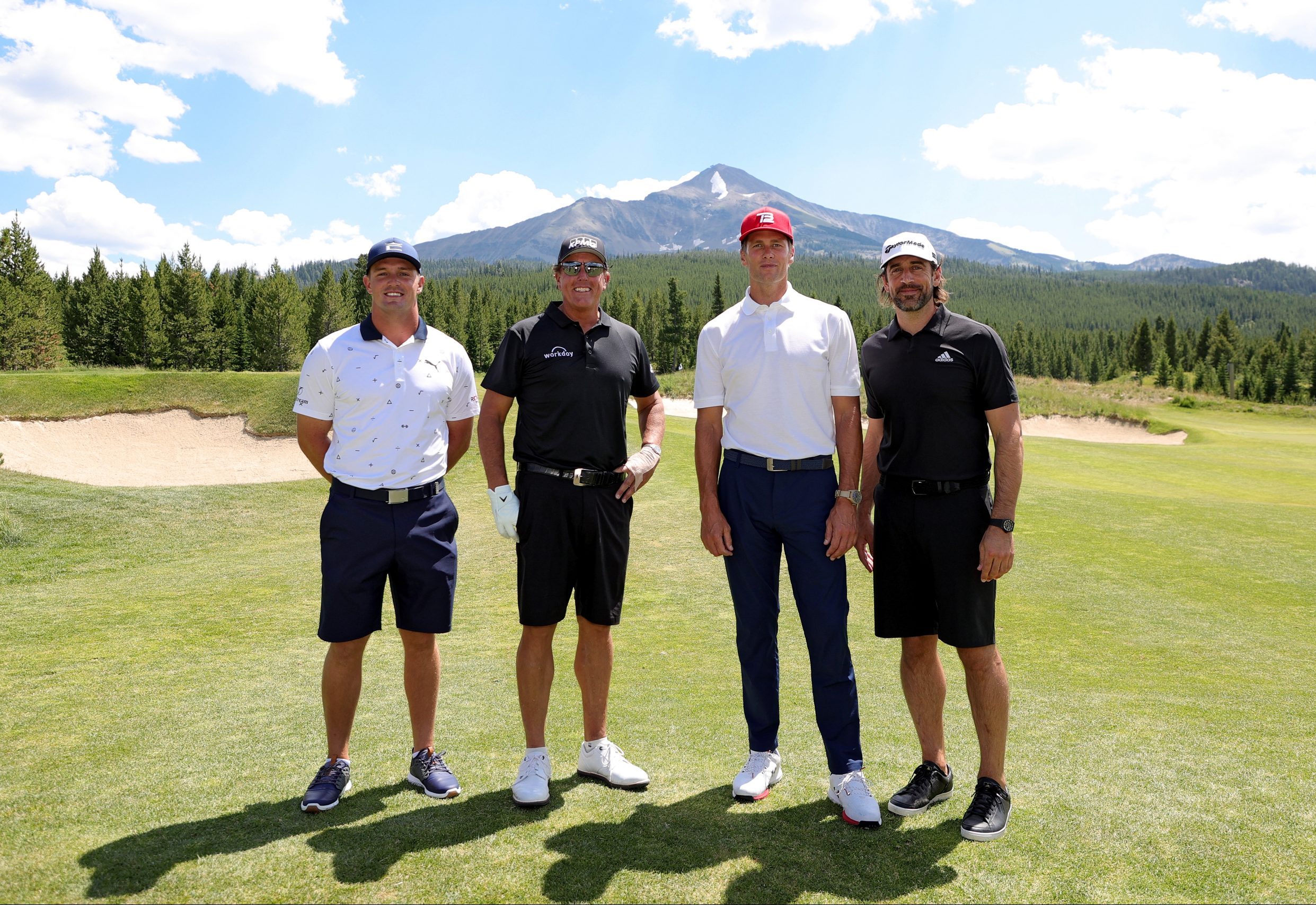 The Match at Moonlight Basin in Big Sky spotlighted golf and football legends Phil Mickelson and Tom Brady in a round against Bryson DeChambeau and Aaron Rodgers that fed millions around Montana and the nation.

During what was likely the most watched sporting event in Montana state history, the only spectators beyond some lucky Moonlight members on hand were a fox, a moose, an eagle, and a solitary black bear. Which was kind of the point.

For TBS’ July 6, live broadcast of the celebrity golf event, The Match 4, sponsored by Capital One, played on The Reserve at Moonlight Basin, not even club members were allowed on course. For one thing, they could never have kept up with the four players—NFL legends Tom Brady and Aaron Rodgers, and golf superstars Phil Mickelson and Bryson DeChambeau—who were each speeding around the course in their own golf carts. For those who watched the event live on television, arguably the event’s best feature was the televised banter between the mic’d up players, celebrity announcers like NBA Hall-of-Famer Charles Barkley, and call-in-guests like President Barack Obama. Besides, a full capacity crowd would have driven the wildlife away.

Not long after television cameras zoomed in on the bear browsing alongside the fairway, announcers teased DeChambeau, who was bushwhacking beside the course searching for his ball after an errant shot. “I hope you brought your bear spray,” they said.

“I swear,” he replied, laughing nervously, “if that thing jumps out at me, I’m going to lose it.”

Routine wildlife encounters are a point of pride for Montanans, which is why Big Sky residents were thrilled to showcase the wild animals they coexist with to the hundreds of thousands of people who tuned in for the fourth edition of the jocular made-for-TV charity match (undoubtedly eclipsing even the University of Montana’s most famous football victories). They were also proud of the cause—The Match 4 brought in more than 6.3 million meals for Feeding America and the Montana Food Bank Network, and $2.6 million for My Brother’s Keeper, a nonprofit 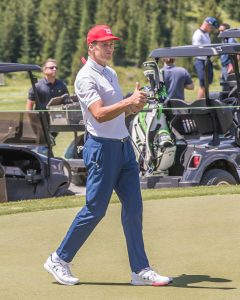 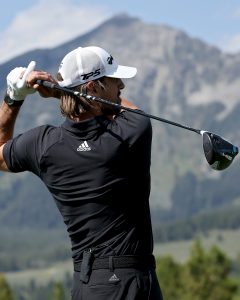 launched by former President Barack Obama that closes opportunity gaps faced by boys and young men of color. “We were proud to host The Match at Moonlight Basin, and to show the world how special Big Sky is,” says Matt Kidd, Managing Director of Lone Mountain Land Company, Moonlight Basin’s owner. “Raising millions to fight hunger locally and nationally made the day even better.”

TBS executives may have been surprised any of it happened at all. When several of them arrived in Big Sky in May to scout the course, they were shocked to find 10 inches of snow still on the fairways, says Greg Wagner, Moonlight Basin’s Director of Golf. “I assured them snow was normal that time of year at 7,500 feet,” he says.

By the time the network returned in late June with hundreds of employees to stage the event, the course was clear of snow. They set up a television studio to situate telecasters Barkley, 2008 Masters champ Trevor Immelman, LPGA player Cheyenne Woods, and 11-time NFL Pro Bowler and Pebble Beach Pro-Am champ Larry Fitzgerald. They set up stadium lighting alongside the final hole in case The Match, airing in prime time, lasted longer than the Montana summer evening. Finally, they erected a pair of massive viewing screens, one at Moonlight Basin for club members to catch the broadcast while watching the players tee off (the lone location for in-person viewing), and another in Big Sky Town Center.

Come match day, Moonlight’s general manager Mike Wilcynski, for one, was happy to view the event with the golf club’s members. “They really know the course, so it was fun to watch it with them and see their reaction to the shots,” he says.

While NFL players Brady and Rodgers aren’t golf pros, they are far from slouches on the links. In fact, Brady may have had the shot of the day, on the third hole, just as President Obama phoned in to chat and talk about his charity. Brady hit a nearly 400-yard drive, landing within 10 feet of the cup, giving his partner Mickelson a chance to eagle the hole.

In the event’s unusual rules, Brady and Mickelson were paired off as a team competing against Rodgers and DeChambeau. All four players hit their own tee shots, but then each team could choose the better shot to continue play with, and they alternated shots from there.

Three-time NFL MVP Rodgers may have been the most valuable golfer of The Match, too. He carried his team to an eventual victory, hitting five of 10 fairways and sinking four putts for birdies through the 14th hole, both better than his partner DeChambeau, the sixth-ranked golfer in the world.

That’s when things got weird. Event organizers decided to make the 14th hole a one-club challenge, meaning each golfer is allowed to use only the club they randomly draw. Rodgers drew the 3-wood, Mickelson a 4-iron, Brady a 7-iron, and DeChambeau drew the pitching wedge. Both pairs, understandably, played the hole poorly with the suboptimal equipment, registering double bogeys on the hole, much to the studio crew’s amusement.

The unusual play extended to the fundraising as well. On the eighth hole, DeChambeau “bought” himself a do-over shot by donating $100,000 to the charities. Players and broadcast commentators alike announced their donations to the charities throughout the match, while ribbing each other endlessly. When Brady’s longtime teammate (and notorious goofball) Rob Gronkowski called into the broadcast to bust Brady’s chops for playing golf on TV rather than training for the upcoming NFL season, Brady skillfully deflected, “I’m studying my competition,” he replied. “I’m 30 yards away from Aaron [Rodgers], who is the leader of the Packers … I think.” (Rodgers was famously in a summer-long contract dispute with the Green Bay Packers.)

The high-level athleticism was likely lost on the crowds of kids jumping in the bouncy castle and playing mini golf at the Big Sky Town Center viewing party, where hundreds gathered in front of a two-story high television screen and held a raffle to raise money for the community’s Big Sky Food Bank.

“I think the spirit of The Match really resonates with the vibe of Big Sky,” says Erik Morrison, Moonlight Community Foundation Member and event producer of the community viewing party. “This community parties with purpose and consistently focuses that energy into initiatives for good. It was such a great way to watch our beautiful home being broadcast out to the world. I received many texts from friends and family remarking how gorgeous Big Sky looked, I just felt so proud of our community.”

Though Wagner was helping out the broadcast crew on the course, he too was receiving those types of congratulatory texts from across the country. He only wishes, he says, that the cameras had kept rolling after the match was over to catch what he thought was the best scene of the day: a bull moose walked right across the tee box on the 17th hole before settling into an adjacent pond. “Bryson [DeChambeau] saw it and was just beside himself,” says Wagner. “He was dancing around like a little kid.” 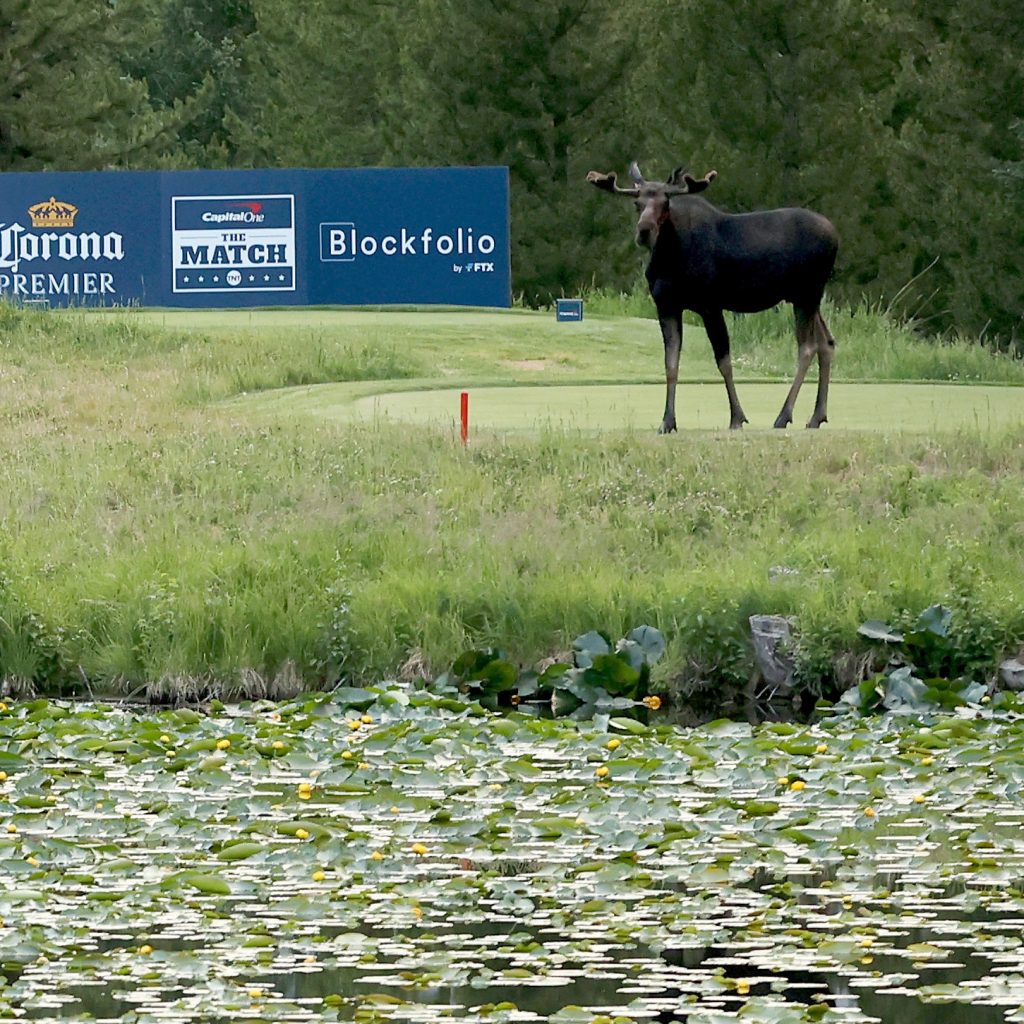